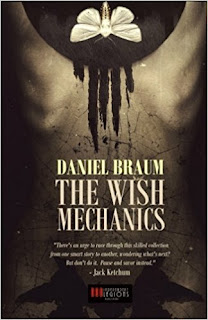 I’ve sung the praises of Daniel Braum’s work enough both in person and on this blog at this point that some of my sentiments might come off a bit redundant here, but I’m not stopping until many, many more people convert to the Church of Braum. If you’ve yet to read my thoughts on the genius work of a writer who deserves to be far more well known than he is, this review will hopefully serve as a suitable introduction.

The Wish Mechanics is Braum’s second full collection of short fiction (his first being The Night Marchers). Unless, of course, you count the much shorter collection Yeti. Tiger. Dragon., which only features three stories. I’ve read enough of Braum’s work at this point that I’m guaranteed two things when opening one of his books: 1. I know what to expect & 2. I honestly have no idea what to expect.

Allow me to clarify. My first statement is regarding consistency of style. Some writers are chameleons, deciding their prose should take multiple forms depending on the story’s needs (I count myself as a member of this particular group). Others maintain a strong, steady voice so invariable it leaves you breathless at the ability to accomplish such a feat. Now, I don’t think one approach is necessarily better than the other, but Braum falls firmly in the second camp, and it works as nothing less than a major strength in his case. As for comment #2, despite having a pretty good idea of how Braum’s words will appear on the page (or how they will sound if read aloud), I never know where those words are going to take me. It is this combination that makes Braum a true visionary of modern fiction.

The quality of the stories never wavers, regardless if Braum is attempting magical realism (“Tea in the Sahara”), introspective horror (“Tetsuya and the Ranagareet”), science fiction (“Resolution Seventeen”), or whatever else he chooses to write. His stories are always threatening to transcend genre, skirting around the hallmarks one might expect and instead opting for an emotional rawness that cannot quite be described. Sometimes the tales are deceptively normal, then take a turn for the weird when you least expect it (“This Is the Sound of Your Dreams Dying”). There is always something not-quite-right going on, almost Twilight Zone-esque, but looking toward the future. In fact, I’d love to see one (or more) of Braum’s stories adapted into a Black Mirror episode (the title story, for instance, might be an especially great fit).

In this collection, Braum’s writing is (as always) earnest, poignant, dark, and moving. If you’re a fan of literary fiction that operates on a fantastical level, I can’t think of another living writer who pulls it off with greater finesse than Daniel Braum.
Posted by chad stroup at 7:42 PM